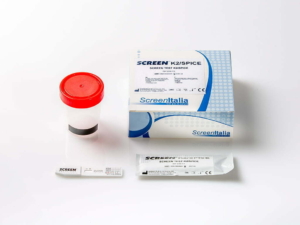 The hair Drug Test is a quick test for the qualitative detection of cotinine, methannphetamines, morphine/opiate and cocaine in the human hair. Only for medical professional use. The quick hair test has unique advantages in the field of rapid anti-drug tests. The hair can provide information on the taking of substances that are not yet available in the long term in other biological samples such as blood and urine. The hair sample is relatively easy to withdraw, to be transported and preserved for long periods of time. The slow metabolism of the substances in the hair allows a long-term persistence, these factors provide better conditions for detecting substances. Cotinine (COT): Cotinine is the metabolite of the first degree of nicotine, a toxic alkaloid that produces stimulation of autonomous ganglia and central nervous system in humans. Nicotine is a substance that potentially every member of a tabby company is exposed, by direct contact or passive inhalation. In addition to tobacco, nicotine is also available on the market as an active ingredient of smoke replacement therapies such as tires, transdermal patches and nicotine nasal sprays. Metamfetamine (MET): Metamphetamine is a stimulating substance that energetically activates some brain systems. Metamphetamine is very similar to amphetamine, but its effects on the central nervous system are greater. Metamphetamine is produced in illegal laboratories and has a high potential for abuse and addiction. The substance can be taken orally, injected or inhaled. High acute doses induce excessive stimulation of the central nervous system, euphoria, lucidity, reduced appetite and a sense of greater energy and power. Cardiovascular reactions to methamphetamine include an increase in blood pressure and cardiac arrhythmias. More acute reactions cause anxiety, paranoia, hallucinations, psychotic behavior and finally depression and exhaustion. morphine (MOP): The oppiaceo term refers to any substance derived from the opium poppy, including natural products, morphine, codeine and semi-synthetic substances such as heroin. The term opium is more generic and refers to any substance that acts as opioid receptor. Opioid analgesics include a vast group of substances that control the pain sewing the SNC. High doses of morphine can produce high levels of tolerance, physiological dependence and can lead to the abuse of the substance. Morphine is eliminated without metabolized and is also the main metabolic product of Codeine and heroin. Cocaine (COC): Cocaine is a powerful stimulant of the central nervous system and a local anesthetic. Initially due to extreme energy and restlessness that but gradually become tremor, hypersensitivity and spasms. Cocaine, taken at high doses, causes fever, loss of sensitivity, difficulty breathing and loss of consciousness. Cocaine is often self-release for nasal inhalation, intravenous injection and free base smoke.