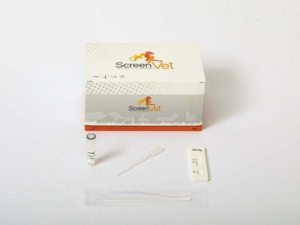 ScreenVet CPV Antigen Cassette Rapid Test Cassette (stool/vomit) is a lateral flow cassette (stool/vomit) rapid test based on the immunochromatographic test principle for the qualitative detection of canine parvovirus antigen (CPV Ag) in stool or He retched. CPV Antigen is a rapid lateral flow cassette test on immunochromatographic examination using the direct (or Sandwich) method. The cassette has a test window. During the execution of the test, the sample is applied to the well (S) present on the cassette. The CPV antigens, if present within the fecal sample, react with the anti-CPV antibodies coated with colloidal gold particles on the test strip. The mixture then migrates upward on the membrane chromatographically by capillary action and reacts with anti-CPV antibodies on the membrane in the T (test) line region. If the sample contains Canine Parvovirus, a colored line will appear in the test line area indicating a positive result. If the sample does not contain CPV antigens, no colored line will appear in the test line region indicating a negative result. To serve as a procedural control, a colored line will always appear in the control line region (C), indicating that the correct volume of sample has been added and that membrane shedding has occurred.