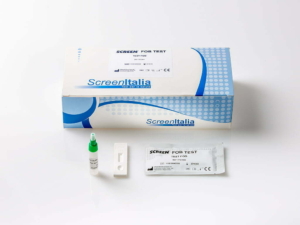 Register or Login to see the price
Add to the list of desired products
This item is selling fast!
Calprotectin Rapid Test – Product code: SC-0777-25

The rapid test for Calprotectin in feces is a rapid immunochromatographic test for the qualitative detection of Calprotectin in human stool samples useful in the diagnosis of inflammatory gastrointestinal disorders. The Calprotectin Rapid Test Cassette (Feces) can detect low Calprotectin levels as low as 50 μg/g or 140 ng/ml of stool. Within-run precision was determined using 15 replicates of three samples: 140 ng/mL, 500 ng/mL, and 10 μg/mL positive samples. The samples were correctly identified in> 99% of cases. Calprotectin is a 24 kDa protein capable of binding calcium proteins S100A8 and S100A9. The complex constitutes up to 60% of the soluble protein content of the neutrophilic cytosol. Calprotectin becomes available in the intestinal lumen via leukocyte release, active secretion, cell disruption and cell death. This causes elevated levels of fecal calprotectin, detectable in the sample. An elevated calprotectin in the stool therefore indicates a migration of neutrophils into the intestinal mucosa, which occurs during intestinal inflammation. Fecal calprotectin has been used to detect intestinal inflammation and can serve as a marker for visceral inflammatory disorders. Calprotectin is useful as a marker as it resists enzymatic degradation and can easily be measured in faeces. The rapid test for Calprotectin (Feces) is a qualitative, lateral scrolling immunoassay for the qualitative detection of Calprotectin in stool samples. In this test the membrane is pre-coated with anti-Calprotectin antibody in the test line area. During the test, the sample reacts with the particle coated with anti-Calprotectin antibody. The compound migrates upwards on the membrane chromatographically by capillary action reacting with the anti Calprotectin antibody on the membrane and generates a colored line in the test line area. The presence of this colored line indicates a positive result, while its absence indicates a negative result. As a procedural control, a colored line always appears in the control line region, indicating that the correct volume of sample has been used and that the membrane has been soaked.