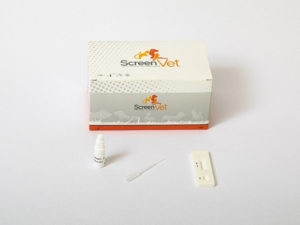 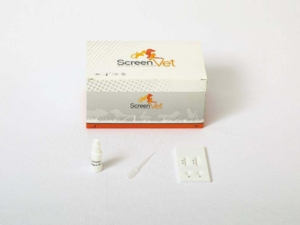 The C. Bru-LPS Antibody Rapid Cassette Test (Whole Blood/Serum/Plasma) is a side scrolling sandwich immunochromatographic test for the qualitative detection of canine brucella LPS antibody (C. Bru-LPS Ab) in blood canine whole, serum or plasma. The C. Bru-LPS Antibody Rapid Cassette Test is a sandwich side scrolling immunochromatographic test. The test cassette has an analysis window. The analysis window has an invisible zone of the T line (test) and the C line (control) zone. When the sample is added to the sample well on the cassette, the liquid flows sideways over the surface of the test strip. If there is enough canine brucella LPS antibody in the sample, a visible T line appears in the T zone. The C line should always appear after adding the sample, confirming the validity of the result. In this way the cassette can accurately indicate the presence of canine brucella LPS antibody in the sample.