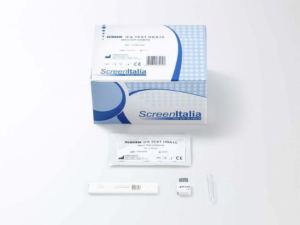 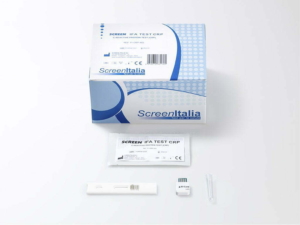 Test for the diagnosis of MB Creatine Kinase (CK-MB) by measuring on whole blood, serum or plasma with the use of the Immunofluorescence Analyzer. For professional in vitro diagnostic use only. The CK-MB Cassette Test (Whole Blood / Serum / Plasma) is an immunochromatographic test for the quantitative detection of human CK-MB on whole blood, serum or plasma as an aid in the diagnosis of myocardial infarction (MI). Creatine Kinase MB (CK-MB) is an enzyme found in heart muscle with a molecular weight of 87.0 kDa1. Creatine Kinase is a dimeric molecule formed by two subunits called “M” and “B” which combine to form three different isoenzymes, CK-MM, CK-BB and CK-MB. CK-MB is the creatine kinase isoenzyme most involved in the metabolism of heart muscle tissue2. The release of CK-MB into the blood following MI can be detected within 3-8 hours of the onset of symptoms. It peaks after 9-30 hours and returns to baseline after 48-72 hours3. CK-MB is a major cardiac marker and is widely recognized as a typical marker for the diagnosis of MI. The CK-MB Cassette Test (Whole Blood / Serum / Plasma) is a simple test that uses a combination of antibody coated particles and capture reagents to quantitatively detect CK-MB in whole blood, serum or plasma. The CK-MB Cassette Test (Whole Blood / Serum / Plasma) is based on immunofluorescence. The sample moves across the strip from the sample pad to the absorbent pad. If the sample contains CK-MB, it attaches to the fluorescent beads conjugated to anti-CK-MB antibodies. Then the compound is captured by the capture antibodies placed on the nitrocellulose membrane (Test line). The concentration of CK-MB in the sample is directly proportional to the intensity of the fluorescent signal captured on the T line. Depending on the intensity of the fluorescence on the test and the standard curve, the concentration of CK-MB in the sample is calculated by the SCREEN Analyzer ® to show the concentration of CK-MB in the sample