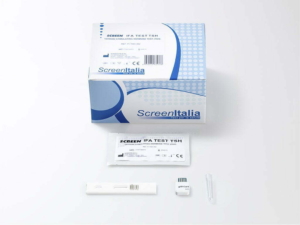 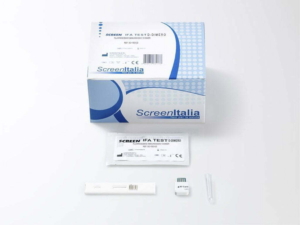 Rapid test for the diagnosis of Human Occult Blood in faeces using the SCREEN® Immunofluorescence Analyzer. For professional in vitro use only. The FOB (Feces) cassette test is designed for the in vitro quantitative detection of Human Occult Blood in feces. The FOB Cassette Test (Feces) detects Human Occult Blood in stool based on immunofluorescence. Many diseases can cause hidden blood in the stool. This is also known as Fecal Occult Blood (FOB), Human Occult Blood or Human Hemoglobin. In the early stages, gastrointestinal problems such as colon cancer, ulcers, polyps, colitis, diverticulitis, and fissures may show no visible symptoms, but only occult blood. Traditional methods based on guaiac testing are insensitive and specific and also have dietary restrictions prior to testing. The FOB cassette test (Feces) is a rapid test for the quantitative detection of low levels of Occult Blood in the stool. The test uses a double antibody method to selectively detect Fecal Occult Blood at 10-1000 ng / mL. Furthermore, unlike guaiac tests, the accuracy of the test is not affected by the patients’ diet. The FOB Cassette Test (Feces) detects Human Occult Blood in stool based on immunofluorescence. The sample moves across the swab strip from the sample onto the absorbent pad. If the sample contains hemoglobin, it will attach to the beads conjugated with anti-hemoglobin antibodies. Then the compound will be captured by the capture antibodies that cover the nitrocellulose membrane (Test line). The hemoglobin concentration in the sample is directly proportional to the intensity of the fluorescence signal captured on the T line. Depending on the fluorescence intensity of the test and the standard curve, the SCREEN® Analyzer will be able to calculate the hemoglobin concentration in the sample.