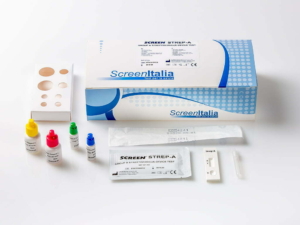 Rapid test for the qualitative detection of Streptococcus pneumoniae antigens in human urine specimens. For professional in vitro diagnostic use only. The S. pneumoniae antigen cassette rapid test (in urine) is a rapid chromatographic immunoassay for the qualitative detection of Streptococcus Pneumoniae antigens in human urine samples. The S. pneumoniae Antigen Cassette Test (Through Urine) can detect S. pneumoniae antigen starting from 0.25 ng/ml. Streptococcus pneumoniae, or pneumococcus, is a Gram-positive, alpha-haemolytic (under aerobic conditions) or beta-haemolytic (under anaerobic conditions), facultative anaerobic member of the genus Streptococcus, 1 As a significant human pathogenic bacterium, S.pneumoniae has been recognized as a major cause of pneumonia in the late 19th century and is the subject of numerous studies on humoral immunity. S. pneumoniae resides asymptomatically in healthy carriers, typically colonizing the respiratory tract, sinuses, and nasal cavity. However, in sensitive people with weaker immune systems, such as the elderly and young children, the bacterium can become pathogenic and spread to other parts of the body and eventually cause disease. It spreads through direct person-to-person contact via saliva droplets and self-injection in people carrying the bacteria in the upper respiratory tract. 2 It can cause neonatal infections. S.pneumoniae is the leading cause of publicly acquired pneumonia and meningitis in children and the elderly, 4 and of septicemia in those infected with HIV. The body causes many types of pneumococcal infections other than pneumonia. These invasive pneumococcal diseases include bronchitis, rhinitis, otitis media, conjunctivitis, meningitis, sepsis, osteomyelitis, septic arthritis, endocarditis, peritonitis, pericarditis, and brain abscess. The S. pneumoniae Antigen Cassette Test (Urine) is a qualitative membrane immunoassay for the detection of S. pneumoniae in urine samples. During the test, the antigens of Streptococcus Pneumoniae (S. pneumoniae), if present on the test sample, react with the conjugate antibody of S.pneumoniae in the reagent area. The conjugate-antigen complex thus formed will bind with the Anti-S.pneumoniae antibodies coated on the membrane in case of a positive result. This would result in a dark red colored line in the T line region in the event of a positive result. In the event of a negative result, no conjugate would bind with the Anti S.pneumoniae that covers the T line region and no line would form in the T line region of the test membrane. The intensity of the lines will vary based on the amount of antigen present in the sample. A line in the control region should appear in all correctly executed cases. Absence of the C line indicates an invalid test result.