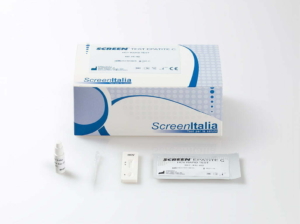 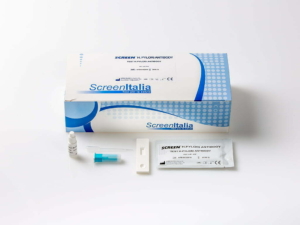 SCREEN TEST EPATITE A – HAV

Rapid test for the qualitative detection of the hepatitis A virus on serum or plasma. For professional in vitro diagnostic use only. The HAV IgM test on cassette is a rapid chromatographic immunoassay for the qualitative detection of IgM antibodies to the hepatitis A virus (HAV) in serum or plasma. The HAV IgM rapid test cassette was created to detect anti-HAV IgM in less than 20 minutes by not necessarily qualified medical personnel and without bulky laboratory equipment. HAV is a positive RNA virus, a unique member of picornavirdae1. Its transmission depends mainly on serial transmission from person to person via fecal gold. Although hepatitis A is not normally a sexually transmitted disease, the infection rate is high among male homosexuals, due to oral-anal contact. The HAV IgM Rapid Test should be used to detect anti-HAV IgM in less than 15 minutes even by untrained or unskilled personnel, without bulky laboratory equipment. The test is based on a technology that combines the principles of immunochromatography and fluid dynamics. The test contains recombinant anti-human mouse IgM immobilized on the membrane within the test area. After the sample has been added to the Cassette sample well, it reacts with the recombinant mouse anti-human IgM coated particles in the test. The result is positive when a colored line forms in the test area, no colored line in the test area indicates a negative result. To serve as a procedural control, a colored line will always appear in the control line region indicating that an adequate volume of sample has been added and that membrane transpiration has occurred.