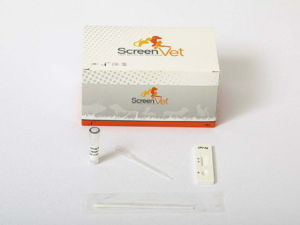 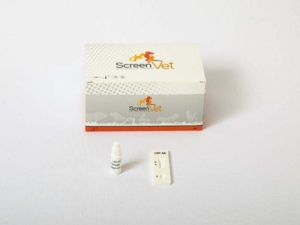 FPV Antigen Cassette Rapid Test Cassette (Feces/Vomiting) is a lateral flow immunochromatographic test for the qualitative detection of Feline Panleukopenia Virus (FPV Ag) from cat feces or vomit. FPV Antigen Cassette Rapid Test Cassette is a lateral flow immunochromatographic test based on the direct (or Sandwich) method. The cassette has a test window. The test window has an invisible T (test) zone and C (control) zone. While performing the test, the sample is applied to the well (S) on the cassette. FPV antigens, if present in the sample, react with the gold-coated anti-FPV antibodies found in the test strip. The mixture then migrates upward on the membrane chromatographically by capillary action and reacts with the anti-FPV antibodies in the membrane on the test line region. If the specimen contains Feline Panleukopenia Virus, a colored line appears in the test line area indicating a positive result. If the sample does not contain FPV antigens, no colored lines will appear in the test line region indicating a negative result. As a procedural control feature, a colored line will always appear in the control line region, indicating that the correct volume of sample has been added and that membrane shedding has occurred.