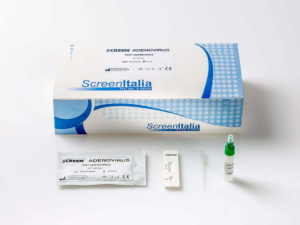 The rapid test for Norovirus (Feces) is a rapid immunochromatographic test for the qualitative detection of Norovirus in human stool samples useful in the diagnosis of Norovirus infection. The Norovirus rapid test (Feces) was compared with the RT-PCR method, demonstrating an overall accuracy of 94.29%. The presence of a colored line in the T1 area indicates a positive result for Genogroup 1 while in T2 it indicates a positive result for Genogroup 2, while its absence indicates a negative result. As a procedural control, a line will always appear in the control region (C) to indicate that the correct volume of sample has been used and that the membrane has been soaked. Noroviruses (NoVs) are a genetically diverse group of single-stranded RNA viruses, belonging to the Caliciviridae family. For decades they were called “small round structured viruses” (SRSV) or “Norwalk-like viruses” until their taxonomy was studied using modern molecular techniques. Four antigenic types of SRSV were initially recognized, but more recently three genogroups with the Norovirus genus have been identified. Genogroup 1 and Genogroup 2 are associated with human infections while Genogroup 3 is associated with bovine and swine infection. Noroviruses are a leading cause of acute gastroenteritis worldwide, often causing extremely virulent outbreaks in communities. They are very contagious, with an inoculum of as many as 10 particles that can cause infections. Transmission occurs through ingestion of contaminated food and water and spread from person to person. Transmission is predominantly fecal-oral, but can be inhaled due to aerosol vomitus, which typically contains abundant infectious virus particles. Outbreaks can involve different transmission paths. The disease is acute, usually mild, although it has caused deaths among the elderly and follows an incubation period of 24-48 hours although cases can occur within 12 hours of exposure. Norovirus’s ability to cause epidemics in communities has become a major public health concern. Norovirus outbreaks can be associated with different restaurants and institutions, such as nursing homes, hospitals, and elite sports fields. Infections in newborns, elderly or frail patients can be fatal if left untreated. Symptoms of Norovirus disease usually include nausea, vomiting, diarrhea, and some stomach cramps. Sometimes people also have a low-grade fever, chills, headache, body aches, and a general sense of fatigue. The disease often begins suddenly, and the infected person can feel very sick. In most people, the disease is self-limiting with symptoms lasting about 1 to 2 days. In general, children experience more vomiting than adults. The Norovirus Rapid Cassette Test (Feces) is a qualitative flow immunoassay for the detection of Norovirus in human stool samples. The test uses the specific monoclonal antibodies of Genogroup 1 and Genogroup 2 deposited on the membrane. During the test, the stool sample reacts with the conjugated antibodies. The mixture migrates chromatographically along the membrane by capillary action to react with the Genogroup 1 and 2 antibodies on the membrane and generates a colored line at the level of zone T1 and T2 respectively. The presence of a colored line in the T1 region indicates a positive result for Genogroup 1 and in the T2 region for the Genogroup 2 group, while its absence indicates a negative result. To serve as a procedural control, a colored line will always appear in the control reaction zone (C) indicating that an appropriate volume of sample has been added and passage across the membrane has occurred successfully.