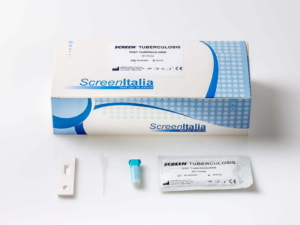 Rapid immunoassay for the qualitative detection of tetanus toxin antibodies in whole blood, serum or plasma to aid in the diagnosis of tetanus toxin infection. The test is designed to assist in the tetanus prophylaxis of patients at risk. Since this disease does not confer immunity, the only prevention is vaccination. Immunoprotection is given by measuring the concentration of tetanus antibodies. As part of emergency medicine, knowing in real time the immune status of subjects at risk (deep wounds) allows for better management of appropriate tetanus prophylaxis. Clostridium tetani is a bacterium that causes tetanus in humans. Clostridium tetani are gram-positive spore-forming rods that are anaerobic. If they enter the body through a wound, they can multiply and produce a toxin that affects the nerves and controls muscle activity. Clostridium tetani toxin binds to peripheral nerve cell membranes and inhibits the release of neurotransmitters. Antibodies against tetanus toxin are produced in humans by the injection of chemically inactive tetanus toxin (tetanus toxoid). Vaccination is the best way to prevent C. Tetani infections in children and adults. In addition, the injection of a specific purified IgG anti-tetanus toxin is used to slow down the action of the toxin during acute infection. Sometimes it is better to know the level of tetanus toxin antibodies in the patient, to assess his immune status, to determine the need for a complementary vaccination that would ensure immunity to the tetanus toxin. In emergency situations, it is important for clinical staff to know the immune status in order to decide on the most suitable tetanus prophylaxis for high-risk (deep wound) patients. The rapid tetanus test (whole blood/serum/plasma) is a qualitative membrane immunoassay for the detection of antibodies to tetanus toxin in whole blood, serum or plasma. In this type of test, purified tetanus toxoid (a non-pathogenic derivative of tetanus toxin) is immobilized on the test line region. After adding the sample to the sample well of the support, this reacts with the particles coated with tetanus toxoid in the test. This compound migrates chromatographically along the test and interacts with the purified tetanus toxoid. If the specimen contains tetanus antibodies, a colored line will form in the test line area indicating a positive result. If the sample does not contain tetanus antibodies, no colored line will appear in this area, indicating a negative result. As a procedural control, a line always appears in the test control zone indicating that the correct amount of sample has been poured and the membrane has been soaked.