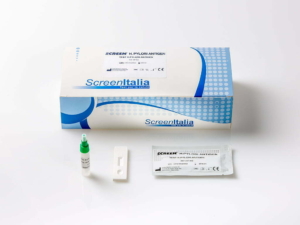 Rapid test for the detection of Helicobacter pylori (H.pylori) antibodies in whole blood, serum or plasma. For professional in vitro diagnostic use only. The H. pylori Antibody Rapid Test Cassette (Whole Blood/Serum/Plasma) is a chromatographic immunoassay for the qualitative detection of H. pylori antibody in whole blood, serum or plasma to aid in the diagnosis of H. pylori infection. The H. pylori is a small coiled bacterium that lives on the surface of the stomach and duodenum. It is involved in the etiology of various gastrointestinal disorders, including duodenal and gastric ulcers, non-ulcer dyspepsia and acute and chronic gastritis. Both invasive and non-invasive methods are used to diagnose H. pylori infection in patients with symptoms of gastrointestinal diseases. Sample and costly invasive diagnostic methods include gastric or duodenal biopsy followed by urease test (presumable), culture and / or histological section. Non-invasive techniques include breath testing for urea, which requires expensive laboratory equipment and moderate radiation exposure, and serological methods. Subjects infected with H. pylori develop antibodies strongly correlated with a histologically confirmed H. pylori infection. The H. pylori Antibody Rapid Test Cassette (Whole Blood/Serum/Plasma) is a simple test that uses a combination of H. pylori antigen coated particles and anti-human IgG to qualitatively and selectively detect H. pylori antibodies in whole blood, serum or plasma. The H. pylori antibody rapid test (Whole Blood/Serum/Plasma) is a qualitative immunoassay based on a membrane for the detection of H. pylori antibodies in whole blood, serum or plasma. In the procedure of this test, the anti-human IgG is immobilized in the test line area. After adding the sample to the instrumentation well, this reacts with the particles coated with the H. pylori antigen of the test. This compound migrates chromatographically for the entire length of the test and interacts with the immobilized anti-human IgG. If the specimen contains H. pylori antibodies, a colored line appears in the test area indicating a positive result. If the specimen does not contain H. pylori antibodies, no colored line will appear in this area indicating a negative result. As a procedural control, a colored line always appears in the control line region, indicating that the correct volume of sample has been used and that the membrane has been soaked.